Like many, you are passionate about Viking culture.... After discovering the cult series to their credit, you like to take the time to learn more about the history of a people with many myths... Within each culture, there are symbols, tattooed on men's bodies or transformed into a talisman.

Viking culture is no exception to this, quite the contrary. And even if historians do not always agree that the Vikings tattooed their bodies with them, like so many traces of their lives and teachings, let us return together to the essential Viking symbols...

1. Valknut, The Viking symbol of Odin We start our overview of Viking symbols with the Valknut! Representing 3 intertwined triangles, associated with the God Odin, Valknut is a symbol of fallen knots, or even of warriors killed in combat. Each of the triangles then symbolizes a kingdom, all intertwined: earth, hell and heaven. Historians have found many Germanic tombs decorated with this symbol. The Vikings, who did not bury their dead, used this symbol to pay tribute to the brave and recognized Nordic warriors!
Throughout the cultures, it is also known as " Heart of Hrunger ".

2. The Horn of Odin, a sacred symbol! If we look at the culture of the Vikings, we notice the predominant place of Odin, Father of all the Gods. The horn of Odin thus joins the most famous Viking symbols. Used in many rituals, according to ancestral accounts, it actually symbolizes the three projects of Odhroerir, and was particularly found on Scandinavian lands!

Learn More about the horn of Odin here Thor is one of the prized Gods in Viking culture, respected by men and warriors, he was then the symbol of strength and protection. Thus, among the Viking symbols is Thor's hammer, also known as Mjolnir. Most often worn as a talisman, it provides protection to the wearer, a symbol of choice at the heart of the northern heritage!

4. The Vegvisir, the viking compass

It is at the heart of Icelandic tradition, and although it is not fully a symbol created by the Vikings, their culture has adopted it, passing through Icelandic lands. With its intersecting lines and symbols, Vegsivir had a special meaning: we will never lose our way, in storms or bad weather, even if the path is not known...

5. Aegishjalmr/Aegishjalmur, The Helm of Awe A Powerful Viking Symbol For Physical, Mental And Spiritual Protection! One of the most powerful Nordic symbols is still the Awe Balm today. Deeply rooted in the heart of the Viking tradition and culture, this eight-armed circle, reminiscent of the Vegsivir, symbolizes strength and invincibility. Protector of warriors, the Helm of Awe still retains a somewhat mysterious dimension today, through its many representations!

Learn More About the Helm of Awe 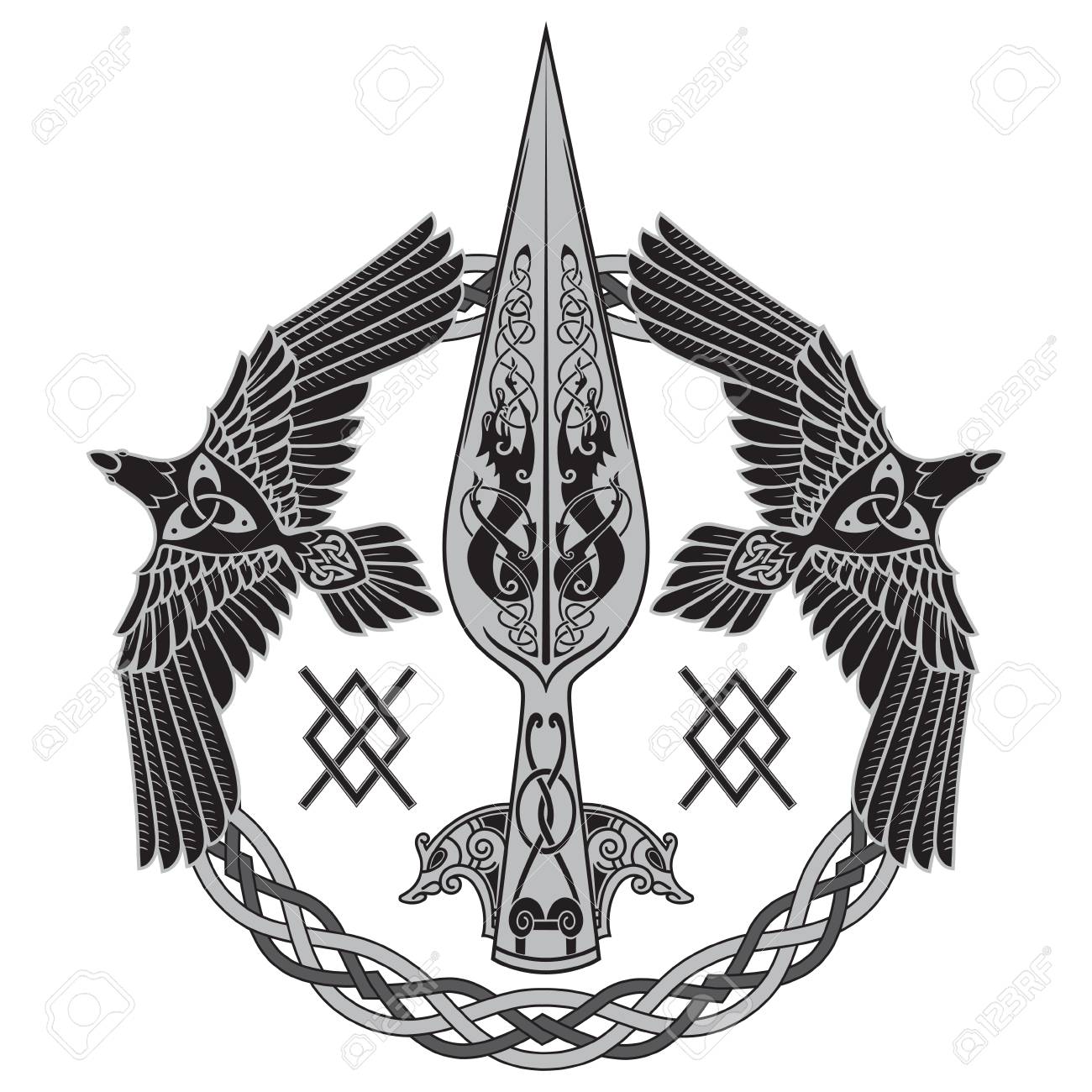 Gungnir gets his name from the word "staggering" in old Icelandic.

She is Odin's magic spear. This weapon, once launched, never missed its target and could not be stopped.

Legend has it that during a visit of the god Loki to the dwarf people, he discovered the spear.

Loki then bet his head with the dwarves that they could not make even more powerful weapons. The dwarves then forged three new weapons, among others, the mjolnir hammer with the handle was shortened because the god loki turned it into a fly to distract the dwarves during their work.

Hugin and Munin are two ravens, brothers, who have been at the service of Odin the Father of All Things since time immemorial, before also serving his successors, acting as ears and eyes across the Nine Worlds for their sovereign. Every morning, Odin, or his successor, sends Hugin and Munin through the Nine Worlds of the Asgardian dimension to see them return at night, telling their master what they have seen and heard during the day. The pair of ravens served Odin for countless years and even centuries, remaining out of the lives of most Asgardians.

8. Yggdrasil, The World Tree or "Tree of Life" In the middle of Asgard, where the gods and goddesses live, lies Yggdrasil. Yggdrasil is the tree of life, and it is an evergreen ash tree; the branches extend over the nine worlds of northern mythology, and reach upwards and above the sky. Yggdrasil is carried by three enormous roots, the first root of Yggdrasil is in Asgard, the house of the Gods is right next to the aptly named Urd, this is where the Gods and Goddesses have their daily meetings.
The second root of Yggdrasil goes down to Jotunheim, the land of giants, next to this root is the well of Mimir. The third Yggdrasil root goes down to Niflheim, near the Hvergelmir well. It is here that the dragon Nidhug chews one of the Yggdrasil roots. Nidhug is also known to suck the blood from corpses arriving in Hel. At the very top of Yggdrasil lives an eagle, the eagle and the Nidhug dragon are bitter enemies, they really despise each other. There is a squirrel named Ratatatosk, who spends most of the day running along the ash tree.

You can click here for learn more about Yggdrasil

9. The Vikings runes - The Magical Futhark Finally, to finish our presentation of Viking symbols, we cannot avoid the symbols present in Viking runes. A people with deeply rooted esoteric traditions, the Vikings did not hesitate to question the Gods and oracles to prepare for their future, to know the outcome of battles, to protect their families and peoples.
The rune games thus present many symbols, each of which has a particular meaning: joy, bravery, movement, communication, warrior, etc....

Here, you can Learn everythings about Futhark, viking alphabet, and norse Runes

Svefnthorn pronounced "SVEFN-thorn". This figure appears in several Scandinavian sagas as well as folk magic formulas that appeared long after the Viking era. The Svefnthorn is translated as "thorn of sleep". It was used to put an opponent into a deep sleep from which he would find it difficult to wake up.

Although the Svefnthorn has been mentioned several times in Norse mythology, this symbol has been drawn in two completely different ways and the exact symbolism is still unknown.

In The Saga of the Volsungs, Odin used a Svefnthorn to plunge the Valkyrie Brynhildr into a sleep from which she was unable to awaken until the hero Sigurd, brave enough, was able to cross the flames, which Odin had lit around her, to reach her.

The Saga of King Hrolf Kraki tells us that Queen Olof "stung" King Helgi with a Svefnthorn in order to knock him out.

In the Saga of Gongu-Hrolf, Vilhjalmr drove a Svefnthorn into Hrolf's head during the night. He did not wake up until long afterwards when a horse pushed him and knocked the thorn out.

In one of the earliest modern Icelandic books of spells, "The Ninth Spell in Huld's Manuscript", refers to the Svefnthorn and says :

"This sign would be carved on oak and placed under the head of the one who is supposed to sleep so that he cannot wake up before he is taken away. The symbol looks like a row of four harpoons. »

We are the Creators, Editors of the Viking store but also great enthusiasts of Norse mythology and the Vikings so we share with great pleasure All our knowledge and research with you.

Subscribe now and receive an Book about Vikings & Norse Mythology. On top of that get 5% off for your first order.

Viking Hairstyles For Men / Best & Badaas Ideas for you.